Old Ambulance Station set to be made new again

A development Application has been lodged with Cessnock City Council to transform the old Ambulance Station building on the corner of Keene Street and North Avenue Cessnock into a new retail and commercial building.  The application has been lodged by Insite Planning Services on behalf of the new owner and developer of the site Mr Lee Woodward of VC Management, a Central Coast based development company.

"I've been coming to Cessnock for many years and have always been impressed with the town's architecture and heritage" Mr Woodward said.  "The ambulance station is a classic art deco style building built in the 1950's and we are excited about being able to retain the existing building and transform it into a new modern use." 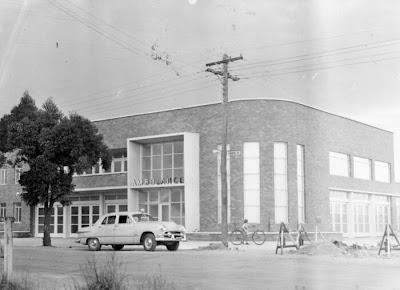 Above: A photograph of the building taken in the 1950's

Mr Woodward went on to explain that he was inspired to do something special with the building after listening to an interview with Kevin McLoud, the presenter of the popular ABC series Grand Designs.  "When he visited Australia last year, a reporter asked him 'was there a place that captured his imagination architecutrally in this country', and McLoud responded that he 'loved Cessnock in the NSW Hunter Valley'.  So we are going to retain this beautiful building and bring it back to life".

Stephen Leathley, Planning Director at Insite Planning Services explained the proposal.  "The plans show the ground floor being converted into retail premises with offices to be located on the first floor.  The old manager's residence n Keene Street is to be demolished and replaced by a new contemporary building that will tie in with the existing art deco building, without replicating it." 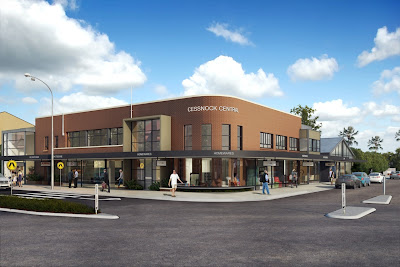 Above: an artists impression of the finished building

One of the significant elements to the proposal, Mr Woodward explained, was the conversion of the interior courtyard into a village green.  "Cessnock CBD probably lacks active open space areas where people can sit and enjoy the beautiful weather the town seems to enjoy for the majority of the year.  So we decided that the best use of this space was as a formal area with landscaping for people to use.  We are intending on having a number of local food outlets so this will be a pleasant space where people can sit and enjoy a coffee or their lunch and catch up with friends while in town."

LJ Hooker Cessnock Principal Bryce Gibson said that there was already strong interest from potential tenants.  "We have fielded enquiries for both the retail and commercial spaces.  This redevelopment will offer premium office and retail space right in the centre of Cessnock and the exciting challenge in working with the owner is going to be getting the right mix of businesses into this space.  The owner is keen to get local producers to take up spaces in the retail area as well as other businesses that lift the retail opportunities in the town, which we think Cessnock is ready for."

Mr Leathley said that he hoped this would see a trend for new development in the town.  "While it is great to see large scale retailing formats like Bunnings coming to town, it is also really important for Cessnock that there are developers out there that are willing to retain existing buildings, like this beautiful art deco building, because it will assist in breathing life into the CBD.  I think we tend to take for granted the architecture and heritage of this town, because lets face it, the easy option here was to knock the building down and start again.  But I think Lee has shown that these existing buildings should be embraced, so hopefully we will have other landowners knocking on our door wanting to do similar projects with the other buildings around town."

Mr Leathley said that Cessnock Council would be shortly placing the application on exhibition and people would be given the opportunity to have their say on the project.
Posted by Insite Planning Services at 16:38 No comments: